RSS feed for this section
This category contains 315 posts

A week after the Sukma encounter, which killed 12 personnel of Central Reserve Police Force (CRPF), the maoist party released a press statement carrying an image of assembled modern weapons they Possessed from the dead CRPF personnel.
The picture along with the statement released by the South Bastar Divisional Committee of CPI (Maoist) showed four AK-47 assault rifles, six INSAS rifles, One Light Machine Gun (LMG), one Under Barrel Grenade Launcher (UBGL) two wireless sets and over 1130 bullet cartridges taken away by the rebels.

END_OF_DOCUMENT_TOKEN_TO_BE_REPLACED 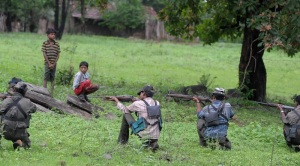 Eight maoists and two policemen were killed in a raging encounter in Chhattisgarh’s Dantewada district on Saturday, police said.
Two security personnel were also injured in the gun battle going on in the forest of Barrempara village under Aranpur police station area of the state’s Maoist-affected Bastar region.
Explosives, one AK-47 and an SLR rifle were recovered from the spot.
Deputy inspector general (DIG) of Dantewada region Sunderraj P said a police team from Aranpur police station came under attack while patrolling the region.
“The encounter and combing operation are still on. More recoveries could take place,” added the DIG.
The injured security personnel have been identified as Dogendra Paul Patro and Sangram Singh Rana. Doctors attending them said they are out of danger.
Sources said a senior woman Maoist cadre ,Palle, was among those killed in the encounter.
At least nine CRPF personnel were killed when Maoists ambushed a road opening party of the paramilitary force in the state’s Sukma district last Saturday.

India People’s War -red spark
Suspected Maoist rebels ambushed a road opening party of the Central Reserve Police Force (CRPF) on Saturday and killed at least 12 troopers in insurgency-hit Sukma district of Chhattisgarh.
The attack took place at 9.10am near Kotacheru under Bheji police station in Sukma – one of the most Maoist affected districts in the country. The Maoists also looted 10 weapons from the dead personnel in the area around 450km away from the state capital.
“Troops of A/E 219 battalion were on a road opening duty and providing security for road construction in the area when they were ambushed. The ambush was followed up by an Improvised Explosive Device (IED) attack,” a CRPF official said in New Delhi.
Five troopers were injured in the attack. Three of them were stated to be critical initially.
The injured were brought to Raipur and admitted to a government hospital, the official added. One of the critically injured later died, taking the toll to 12.
Two Maoists were also killed in the counter attack by the security forces, said a senior police.
Besides weapons, the Maoists also looted two VHF radio sets that the CRPF team was carrying. The CRPF party consisted of 112 personnel.
“Since the attack site is an interior area, the only way of communication is through a satellite phone,” said the CRPF official.
Additional forces have been rushed to the spot and the bodies of the dead soldiers are being retrieved, he added.
The home minister said that the Centre was in direct communication with the state government. In a series of tweets, Rajnath Singh said that those who perpetrated the incident will be brought to justice.
Last month, two Special Task Force (STF) personnel, including an assistant platoon commander, were killed in an encounter in Kondagaon district of Chhattisgarh.

Maoists call Telangana bandh on May 4, 5 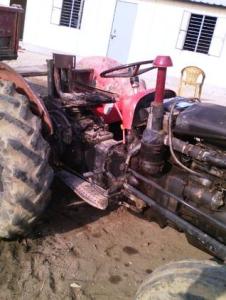 Communist Party of India (Maoists) has called for Telangana bandh on May 4 and 5 in protest against exploitation and displacement of people in the name of development, and Operation Green Hunt.
CPI (Maoists) Telangana State Committee official representative Jagan in a press release appealed to people to observe bandh and make it a success. He charged that while the National Democratic Alliance government at the Centre was trying to enforce Brahmanical Hindu fascism, Telangana Chief Minister K. Chandrasekhar Rao was offering free land, water and power to corporates.
http://www.thehindu.com/news/cities/Hyderabad/operation-green-hunt/article8526136.ece

The outlawed Communist Party of India (Maoist) has claimed responsibility for the killing of seven Central Reserve Police Force personnel in an IED explosion in the Dantewada district of Bastar last month. “The Malewara attack on the CRPF was a fitting reply to the exploitative Modi-Raman Singh regime and revenge for our party’s martyrs. The attack was a part of our PLGA’s (People’s Liberation Guerrilla Army) response to the government of Chhattisgarh’s mission 2016 against us,” said a statement issued by the south sub zonal bureau of the CPI (Maoist).
“The Chhattisgarh government has been running a campaign called ‘Mission 2016’ to flush out Maoists from Bastar. In the name of this mission, the security forces are indulging in attacks on the villages of Bastar. Local civilians are being harassed and are being branded as ‘warrantee Maoists’.
“People of Bastar are being stashed in jails under fraud cases. In the name of encounter killings, local tribals are being killed in cold blood. Since January this year, more than 50 local civilians of Bastar and our party cadres have been killed in fake encounters,” alleged the banned outfit.
http://www.thehindu.com/news/national/other-states/dantewada-attack-was-revenge-maoists/article8505715.ece

Jamshedpur, April 20: The outlawed CPI-Maoist rebels triggered a blast with a view to blow up the under-construction compound wall of an upcoming constable training school at Jadugora in Ghatshila sub-division near here late on Tuesday night. As the intensity of the blast was not very high, it only partially damaged the compound wall. The CRPF camp is located just beside the site of the blast. According to sources, the Naxal rebels planted 11 bombs at the site of which six blasted. The police have recovered the remaining five live can bombs and defused them with the help of the bomb disposal team that arrived from Ranchi.
SP (Rural) M Arshi confirmed that there were in all 11 can bombs planted in the under-constructed constable training school. END_OF_DOCUMENT_TOKEN_TO_BE_REPLACED

Police jawan killed, another injured in gun battle with Naxals

Raipur, Apr 20 (PTI) A police jawan was killed and another one sustained critical injuries during a gun battle with Maoists that took place in the dense forests of the insurgency-hit Sukma district in Chhattisgargh this afternoon, police said.
“The face-off took place in the forests of Marjoom village that falls under Tongpal police station limits, when a joint squad of security forces was carrying out an anti-naxal operation in the bordering region of Sukma-Dantewada districts,” a senior police official told PTI.
Composite squads of STF (Special Task Force), states District Reserve Group (DRG), Central Reserve Police Force (CRPF) and district force had launched the operation from Katekalyan police station area of Dantewada district, located around 450 km away from the state capital, last night, he said.
http://indiatoday.intoday.in/story/police-jawan-killed-another-injured-in-gun-battle-with-naxals/1/647176.html 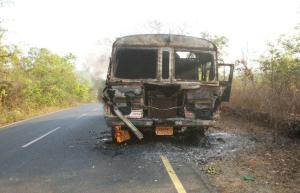 Arson of truck in Dantewada

Three Central Reserve Police Force (CRPF) personnel, including an officer, were on Monday injured in an IED blast in Chhattisgarh’s Sukma district.
The incident occurred between Chintagufa-Burkapal at around 9 am when a road opening party (ROP) of 74th battalion of CRPF was carrying out its task under Chintagufa police station limits, Sukma Additional Superintendent of Police Santosh Singh told PTI.
Inspector Ravi Singh and a constable S Babu was among the injured. Constable Arjun Ram was critically injured in the blast, the ASP said.
http://indianexpress.com/article/india/india-news-india/chhattisgarh-3-crpf-officials-injured-in-ied-blast-additional-forces-rushed-to-the-spot/ 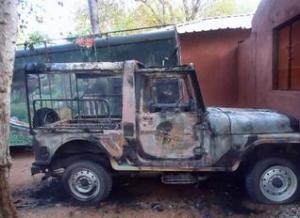 The Tadvai forest guesthouse jeep, allegedly burnt down by Maoists.

A forest guesthouse and a jeep were torched, allegedly by Naxalites, at the Tadvai mandal headquarters between Warangal and Eturunagaram in Telangana, on the intervening night of Friday and Saturday. The guesthouse was recently renovated and some huts were constructed by the forest department to encourage tourism and attract visitors to the State. The facility had remained defunct for many decades fearing Naxal attacks in the thick forests. However, as the Naxalite movement seemed to have declined, the Forest Department recently renovated it.
Note from rebels
A note, written in red ink, purportedly by Karimnagar-Khammam-Warangal Maoist party committee secretary Damodar, said the Telangana State government should stop taking away the podu lands of Adivasis, which are acquired in the name of development, end open-cast mining and stop arresting people leading the “people’s movement.” The note also gave a call to people to join the “movement.” END_OF_DOCUMENT_TOKEN_TO_BE_REPLACED