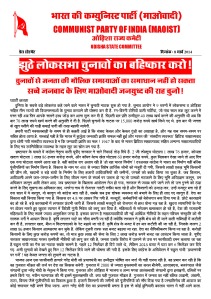 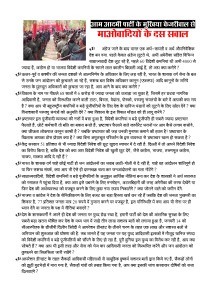 END_OF_DOCUMENT_TOKEN_TO_BE_REPLACED

Hours before Bharatiya Janata Party prime ministerial candidate Narendra Modi’s arrived on his scheduled poll visit to the Bastar region of Chhattisgarh, Naxal rebels targeted the industrial facility of Essar Steel in Kirandul of restive Dantewada district on Friday afternoon. The Naxalites set 17 trucks parked at the loading bay on fire around 1.45 pm and locked the drivers, conductors, and company employees before departing. Chhattisgarh is a BJP-ruled state.
The speculation is that the attack was timed on the day of Modi’s visit, to send a message. Essar has set up an eight million tonne per annum (mtpa) beneficiation plant near Kirandul to supply high-grade iron ore to its pellet plant in Visakhapatnam. The material is pumped as slurry through a 267-km pipeline, the second longest in the world, to Vizag. Naxals had earlier damaged the pipeline and the company was transporting the ore by road. The parked vehicles were waiting for loading when the around 200 armed rebels struck. They rebels did the job and then melted into adjoining forest. The spot is hardly a kilometre from the Kirandul police station.
http://www.business-standard.com/article/current-affairs/naxal-attack-in-dantewada-as-modi-visits-chhattisgarh-114032800853_1.html

The filthy scramble for seats.
A deluge of defections.
Casteist and communal calculations in evaluating candidates’ prospects.
A sickening repetition of false promises.
Crores of black money pumped in to buy allegiances and votes – make no mistake, that ugly spectacle of parliamentary elections is on.
The rulers tell us that this is our golden opportunity to make choices.
Choose between whom?
When all of them insist on more of imperialist globalisation …
When all of them avoid any meaningful steps to end feudal exploitation and oppression …
When all of them approve of even more brutal repression against those who fight back …
When all of them shamelessly record their swelling personal wealth, election after election …
Where is the difference?

END_OF_DOCUMENT_TOKEN_TO_BE_REPLACED

Markets shut, vehicles keep off the roads during daylong Maoist bandh in Ranchi

The daylong bandh called by the CPI(Maoist) on Thursday crippled normal life in the hinterlands. The banned outfit had convened the bandh to protest against the killing of 15 commanders, including Lalesh Yadav, the spokesperson of the Bihar-Jharkhand North Chhattisgarh Special Area Committee (BJNCSAC) last year in March, by rival outfit, the Tritya Prastuti Committee. However, no violent incidents were reported from any corner of the state till the time of filing the report. The Maoists had put up posters and banners in several places of the state in the past few days, asking people to boycott the polls. Markets in Maoist-dominated areas remained shut while long-distance buses and other heavy vehicles stayed off the roads across the state.

END_OF_DOCUMENT_TOKEN_TO_BE_REPLACED

Kolkata – Convention to demand release of all Political Prisoners, Mar 30

The three Constituents APDR, BMC AND ACRA of CDRO have decided to hold a Convention to demand release of all Political Prisoners throughout the country as resolved in the Delhi Meeting of CDRO in the month of February, 2014. The programe is as given below:

We invite all CL/HR activists and concerned people to be present in the Convention. 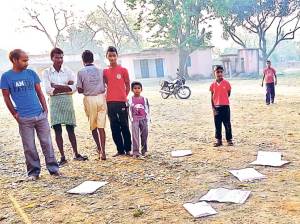 Within 72 hours of a joint meeting conducted by Jharkhand and Bengal’s police officers over controlling Maoist activities during elections, the rebels have thrown down the gauntlet to the cops. On Tuesday night, they pasted anti-poll posters and circulated handbills among people in over a dozen villages under Govindpur block around 15km away from district headquarters. The Maoists’ action has spread panic among the voters in the region.
The polls would be held here on April 24. The posters and handbills that have been issued by the Jharkhand Regional Military Commission – CPI(ML) have directed the villagers to boycott the election and drive out the ‘fascist’ CPM, Congress and BJP from the election field. In the posters, the Maoists have demanded release of their jailed leaders and workers, immediate ban on ‘Operation Green Hunt’, check on price rise, corruption and police atrocities on innocent villagers. An eyewitness said that a group of 25-30 people stormed into the village on Tuesday night and pasted anti-poll posters on the walls of houses, school buildings and at public places. They also distributed handbills in every house, he added. The Maoists pasted posters in Tilaiya, Gurga, Birajpur Chawk, Birajpur High School, Sadhobad, Barbadih, Kharni Vidyalaya, Aasbani, Yadavpur and Kharni More near GT Road.
http://www.hindustantimes.com/india-news/ranchi/j-khand-police-security-forces-ready-to-counter-maoist-offensive/article1-1201210.aspx 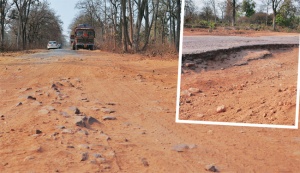 Poor roads cripple security forces in Maoist-hit zones of Chhattisgarh
A nexus between Maoists, construction contractors and government officials has hit the development of key infrastructure like roads in the rebel strongholds of Chhattisgarh, hampering anti-insurgency operations ahead of the polls. The abysmal condition of important roads has slowed down mobilisation of troops and proved a major handicap for security forces. A major national highway that runs through Maoist citadels in Sukma is virtually non-existent for about 80 kilometres.
http://indiatoday.intoday.in/story/poor-roads-chhattisgarh-sukma-maoist-anti-insurgency-ops-bastar/1/351595.html