Police Beat up Prisoners on Prison Premises
The case of JNU student Hem Mishra
The Nagpur police abused and beat up Hem Keshavdutt Mishra, student of Delhi’s Jawaharlal Nehru University and Political Prisoner presently lodged in Nagpur Central Prison over the issue of applying handcuffs. They attacked him cruelly and injured him. This illegal and inhuman act of the police occurred just outside the prison gate within the prison premises on 20-03-2015 at around 10-00 a.m. when Hem Mishra was being taken for medical treatment to the Government Medical Hospital. END_OF_DOCUMENT_TOKEN_TO_BE_REPLACED 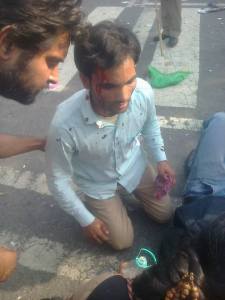 Complete account of the brutal lathi charge on workers outside Delhi Secretariat on the orders of Kejriwal Government on March 25, 2015
by Abhinav Sinha, Countercurrents.org, 28 March, 2015

On 25th March, we witnessed one of the most brutal, probably the most brutal lathi charge on workers in Delhi in at least last 2 decades. It is noteworthy that this lathi-charge was ordered directly by Arvind Kejriwal, as some Police personnel casually mentioned when I was in Police custody. It might seem surprising to some people because formally the Delhi Police is under the Central Government. However, when I asked this question to the Police, they told me that for day-to-day law and order maintenance, the Police is obliged to follow the directives from the CM of Delhi, unless and until it is in contradiction with some directive/order of the Central Government. END_OF_DOCUMENT_TOKEN_TO_BE_REPLACED

From Colombia in support to the People’s War in India

Maoist Gadchiroli Division: ‘Government pits Adivavis against each other’ 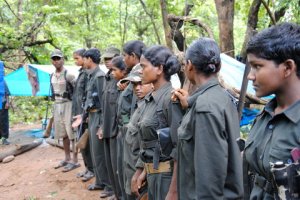 Etapalli (Gadchiroli): Top Naxal leaders, part of the south Gadchiroli division’s western regional committee, slammed the government claiming it is luring tribals to take up arms against each other during an interaction with the media at an undisclosed location in the forest where Maharashtra-Chhattisgarh shares the border in Etapalli taluka of Gadchiroli on Thursday. The rebels’ discussion mostly revolved around their appeal to C-60 commandos of Gadchiroli, who are mostly tribals and celebrating their silver jubilee this year. END_OF_DOCUMENT_TOKEN_TO_BE_REPLACED 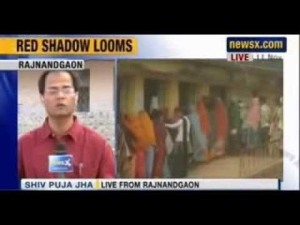 Two CRPF personnel were on Friday injured in separate pressure bomb blasts triggered by Naxals in Chhattisgarh’s Bijapur district, police said. The blasts occurred at separate spots near Fundri village when the paramilitary personnel were conducting anti-Naxal operations under Bhairamgarh police station limits, Bijapur Additional Superintendent of Police Indira Kalyan Elesela said.
The security personnel accidentally came in contact with pressure bombs planted by the Maoists in Fundri hills area that exploded, injuring sub-inspector B B Rai and constable Ravi Hari Patil belonging to 199th battalion of Central Reserve Police Force (CRPF), he said. Reinforcement was rushed to both the places and the injured personnel were brought to Bijapur district hospital. Later, they were airlifted to Raipur for treatment, he said. A combing operation was underway in the region to nab the culprits, he added. END_OF_DOCUMENT_TOKEN_TO_BE_REPLACED

The story of ‘Maoist’ couple arrested in Pune last year

In Chandrapur, people remember Arun Bhanudas Bhelke (38) and Kanchan Nanaware (31) as influential youth leaders of the Deshbhakti Yuva Manch (DYM), which was later branded as a “front organisation” of the Maoists. Arrested in Pune by the Anti Terrorism Squad (ATS) in September 2014, the “Maoist” couple is now lodged in Yerawada jail. The ATS recently filed a chargesheet against them in Shivajinagar court. Background According to the ATS, both Arun and Kanchan are graduates. END_OF_DOCUMENT_TOKEN_TO_BE_REPLACED

The mother of Donna Keshav Rao alias ‘Azad’, the dreaded Maoist accused in the killing of Swami Laxmanananda Saraswati which triggered off a vicious anti-Christian riots in Odisha’s Kandhamal district in 2008, today made a fervent plea for expediting the trial of her son and others, who are on a fast-unto-death inside the Jharpada jail here. Azad’s mother in front of the Jharpada jail in Bhubaneswar on Friday (Pic: Biswaranjan Mishra)To D Kamaluma, Azad’s mother, circulated a memorandum written by her son and other fellow inmates accusing the state police of deliberately delaying the trial in an effort to keep them inside jail despite a High Court ruling asking for expeditious trial.
“We are not being produced in the court on the plea of security, investigating officers are not appearing in court despite repeated summons and witnesses in the case are not being produced in court – all with the intention of delaying the trial,” the memorandum signed by Azad and six others said. It may be noted that seven hardcore Maoists, including the Azad, are on a fast unto death demanding speedy disposal of their cases since Monday last. Azad, an accused in the VHP leader murder case, had surrendered before Andhra Pradesh Director General of Police (DGP) K Aravinda Rao on May 18, 2011. He carried a reward of Rs 10 lakh on his head at that time. Keshav Rao, who worked as Special Zonal Committee member for Andhra-Orissa Border (AOB), played a major role in the kidnap of an IAS officer in the state. While in AOB, he was also allegedly involved in the attacks on several police stations and killing of police personnel.
http://odishasuntimes.com/119947/odisha-cops-delaying-trial-says-top-maoists-mother/ 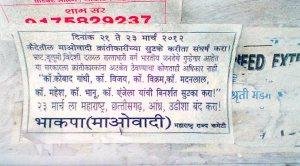 Naxal posters: Three years on, cops still look for clues
Several persons from Pune have been arrested for their alleged Maoist links in the last few years, but investigators have not been able to get any clue about the persons who put up the posters of the banned Naxal outfit Communist Party of India (CPI – Maoist) in the city on March 23, for two consecutive years, in 2012 and 2013. END_OF_DOCUMENT_TOKEN_TO_BE_REPLACED

The Last Issue of People’s March – Voice of Indian Revolution

1
The International Committee to Support the People’s War in India (ICSPWI) appeals all the forces that refer to it, all the forces of the international support to the PW in India, to give substance to the protracted campaign of international support, with any kind of initiatives, according to the possible and necessary timetable in the situation in different countries.
2
ICSPWI calls to bring the international solidarity to the PW in all the anti-imperialist protests and in the May Day demos. 3 ICSPWI welcomes the advanced efforts made by International Delegation-NOWARONPEOPLEINDIA, whose plans proceed with the necessary pace for a successful implementation. We call again anyone is interested in the Delegation to make himself available, taking the necessary contacts.
4
ICSPWI announces that new important publications will be issued in the next time, which can be an effective tool for the knowledge and development of the strategic value of the support for the PW in the current international situation.
5
ICSPWI convenes a plenary meeting, open to representatives of all the supporting organizations, proposing the of 21 June as date and the Northern Italy as place.