This is the concluding chapter of Against Avakianism by Comrade Ajith. Against Avakianism an ideological critique of Bob Avakian, the dogmatic-revisionist leader of the Revolutionary Communist Party of the USA. As one of the leading Maoist thinkers and theoreticians. Ajith has written several significant books and articles and related to land, gender and caste from a Maoist perspective. He was the editor of the international magazine A World to Win, published by the Revolutionary International Movement, a coordinating center of various Maoist parties and forces across the world.
He is a heart patient and the Indian fascist regime has imprisoned him since two years, without any medical treatment. We strongly demand his release and express our solidarity with them, who are raising the voice for his release.
————————————————————————————-

The RCP has taken offence over the C(m)PA’s   characterization  of Avakianism as a “way deeper deviation than that of the UCPN (M)” and demands “Who has aborted a revolution?”1Well, only those who made a revolution can abort it. Therefore, the Avakianists can hardly be blamed of that crime. But what they do is indeed worse. They seek to abort the whole communist movement itself. They try to eliminate MLM as the ideological basis of the ICM and replace it with Avakianism. Their liquidationist, and ultimately rightist, attack is often packaged in ‘left’ form.2 It is deviously presented as an attempt to address real problems faced by the ICM in the context of the setbacks it has suffered. Thus it is less easy to see through its deceptions and that makes it all the more dangerous.
Opposing the PCP formulations on Guiding Thought Avakian had said, “… a “Thought” is a more transcendental thing, a more permanent thing, than whatever the line of a party is at a given time.  A “Thought” is a category which, as I said, is pregnant with and on its way to delivering an “ism.”  So then we will get a lot of different isms, and that’s not good and not correct.”3 Apparently he has tried to resolve this predicament of multiplicity with a ‘synthesis’ that attempts the forced delivery of a new ‘ism’.

HYDERABAD: Several civil society groups, adivasi student bodies and political parties like CPI and CPI(M) have demanded that professor GN Saibaba be immediately provided with blankets and other medical facilities at the Nagpur Central Prison. They held a round-table discussion on the issue at ICSSR Hall in Osmania University on Friday.
The meeting happened following a letter written by the Professor to his wife Vasantha. He had mentioned that he was not given a blanket though the winter had set in. Saibaba, who has 90 per cent disability and is wheelchair-bound, also said that he was not getting his medicines regularly, causing his health to worsen further.
“Though his lawyer visits him every week with medicines, they reach him only 7-10 days later,” said revolutionary writer Varavara Rao. “Barring the right to mobility, a prisoner has all the other rights. But it’s not happening in this case. So Saibaba wants to be shifted to Cherlapally Central Jail in Hyderabad,” he added. Prof Saibaba has been lodged in Nagpur Central Jail since his conviction eight months ago for having links with Maoists.
A petition to shift him was submitted on August 23. The panel discussed ways to expedite this process, while also taking up a campaign to get him and the six others convicted in the case released.

Posted by icspwi ⋅ November 18, 2017
Hail the growing wave of peasant’s agitationsin the country!
Extend full support to the country’s peasants fighting for their just demands!
Build a firm unity of all the people’s movements with the ongoing peasant movement!
Only armed agrarian revolution can fully resolve the burning problems of the peasants!
The path of Naxalbari is the only path of liberation for the Indian peasantry!
Boldly raise the slogan ofland to the tiller and all power to the people
integral text
ask
ICSPWI
csgpindia@gmail.com

Sources in the Indian press report a new confrontation between repressive forces and members of the Maoist People’s Liberation Guerrilla Army in the Baresandh area of the Latehar district, Jharkhand.
Four CRPF troops were injured in the explosion of a mine placed in its path by the Maoists. In the area of Baresandh and its wooded areas of Latehar, the repressive forces have been carrying out operations against communist forces for four days in a district considered a red base.

Freedom for Saibaba and all political prisoners in India – towards a new international day of action! ICSPWI 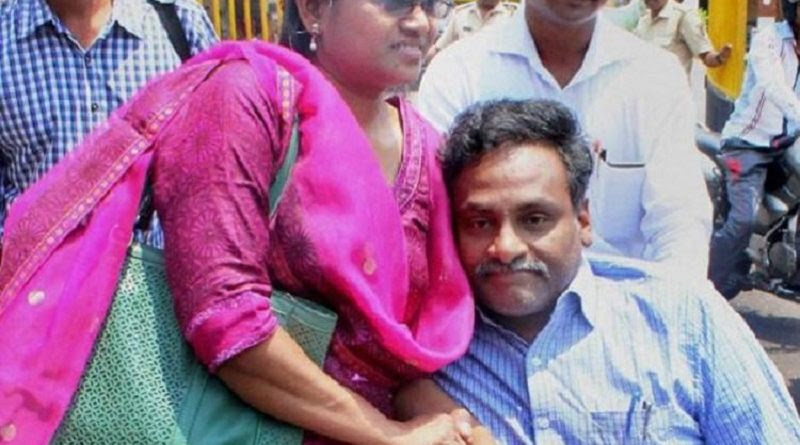 r
The wheelchair-bound former English professor was convicted in March this year for his Maoist links and for “waging war” against the country.
Eight months after former Delhi University Professor GN Saibaba, who is 90% disabled, was sentenced to life imprisonment, he has written a letter to his wife stating that he will not survive the coming winter.
The wheelchair-bound former English professor at Ram Lal Anand college was convicted for his Maoist links by a sessions court in Maharashtra in March this year.
In the letter to his wife Vasantha, Saibaba, who is lodged at the Nagpur Central Jail, writes, “I am frightened to think of the coming winter. Already I am shivering with continuous fever. I do not have a blanket. I do not have a sweater/jacket. As temperature goes down, excruciating pain continuously in my legs and left hand increases. It is impossible for me to survive here during the winter that starts from November. I am living here like an animal taking its last breaths. Somehow 8 months I managed to survive. But I am not going to survive in the coming winter.”
In the letter that appears to be have been written in late October, Saibaba urges his wife to finalise his legal counsel at the earliest and asks her to inform his advocate, Surendra Gadling, to file his bail application in the first week of November or last week of October.
“You remember if this is not done in this way, my situation will be out of hands. I am not responsible. I am making clear to you. Hereafter I am not going to write about it any longer,” reads his letter.
Saibaba goes on to note that no one is able to understand the struggle and condition of a 90% disabled person who is behind bars. Calling it criminal negligence, he writes, “I am feeling so depressed for requesting you all so many times like a beggar, a destitute. But none of you are moving an inch, no one understands my present condition. No one understands 90% disabled person is behind bars struggling with one hand in condition and suffering with multiple ailments. And no one cares for my life. This is simply criminal negligence, a callous attitude.”
He concludes his emotional letter by asking his wife to take care of her health.
In an interview with DNA, Vasantha alleged that her husband was not receiving basic medicine and that his health was deteriorating. She also said she would visit Saibaba in jail on November 14.
In March this year, Saibaba along with four others, including former JNU student Hem Mishra and journalist Prashant Rahi, were sentenced to life imprisonment by the Gadchiroli Sessions Court in Maharashtra for their Maoist links and for “waging war” against the country.
Saibaba was first arrested in May 2014 from his residence in Delhi based on ‘incriminating material’.
According to The Wire, JNU student Mishra had told police during interrogation that he had acted as a courier between the professor and Maoist leaders.
The former professor was, however, granted bail after 14 months in jail. In March 2016, the Supreme Court had granted him bail on health grounds after his bail application had been rejected by the Bombay High Court, reported CNN News 18.
The apex court also went on to accuse the Maharashtra government’s counsel, stating “You have been extremely unfair to the accused (Prof Saibaba), especially given to his medical examination.”
« Older posts