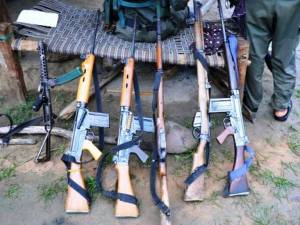 MHA warns of Maoists targeting political leaders
RANCHI: The Union home ministry’s Naxal Management Division has written to Jharkhand police alerting them about the possibility of communist extremists targeting political leaders and security forces during the Lok Sabha elections in the state. The letter (a copy of which is with TOI) says: “The outfit (Maoists) plans to target political leaders and security forces. It has directed its cadres to make all logistic arrangements, including collecting explosives, for the proposed acts of violence. It has particularly identified leaders belonging to Congress, BJP and JVM(P) as targets.” The Naxal Management Division’s alert is based on the recent seizure of documents related to election boycott from rebel camps in Jamui district in Bihar.
While all 24 districts of Jharkhand are Maoist-affected, Dumka, Pakur, Hazaribag, Giridih, Koderma, Dhanbad, Bokaro, Chatra, Ranchi, East Singhbhum and West Singhbhum are the most sensitive. Significantly, all 14 Lok Sabha constituencies in Jharkhand are situated in Maoist strongholds. The alert added that Maoists are planning to organize meetings, rallies, torch-light processions, and cultural programmes to convince locals to boycott the upcoming elections in all the 14 constituencies.
“Our inputs suggest that the CPI Maoists will make a whole hearted effort with a well laid down nefarious strategy to subvert the election process,” the letter said. IG (operation) M L Meena said: “We have started working on the inputs. The SPs have been instructed to focus on area-domination exercises. Our focus is on landmines recovery as Maoists frequently use these explosives to target security personnel and politicians.”
During elections, movement of troops and political leaders increase significantly as politicians take their campaigns to the remotest corners of the state with security personnel in tow. “All SPs have been instructed to deploy enough security personnel during VIP visits . They have been asked to maintain 100% alertness to prevent any untoward incident,” said DGP Rajiv Kumar. Kumar added that the exercise would get more intense as elections approach. “All districts are organizing area-domination exercises to check movement of Maoists,” said Kumar. Kumar, Meena and other senior police officers recently visited to Delhi to participate in an Election Commission meeting where they were told to start preparing for the polls.
http://timesofindia.indiatimes.com/city/ranchi/MHA-warns-of-Maoists-targeting-political-leaders/articleshow/30891925.cms